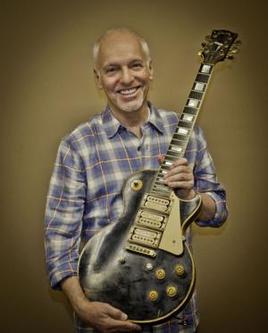 During the latter half of 2011 Peter Frampton celebrated his landmark album Frampton Comes Alive! with the FCA!35 world tour, playing the entire Comes Alive set within each show.

At the start of 2012 Peter Frampton celebrated the return of the famous 1954 black Gibson Les Paul that was such a part of the album, that entire era, those timeless songs and the classic Frampton sound.

The return also came with a thirty-one year old story that script writers the world over would reject for being too strange or bizarre to be believable...

Peter Frampton has his own signature line of black Gibson Les Paul guitars but the one on which they are modelled was the one he used throughout the 1970’s.
In 1980 however, after a decade of use, it was presumed not just lost but destroyed in a plane crash.

The guitar had been in a cargo plane bound for Panama (where Frampton was to perform) but the aircraft crashed on take-off in Caracas, Venezuela.

Tragically lives were lost in the accident and what was presumed to be the end of the famous guitar’s twenty-six years of life was in fact only the beginning of its next thirty-two and eventual return home.

It turns out the guitar had been salvaged from the wreckage and later sold to a musician on the Caribbean island of Curaçao.

Decades later the unnamed guitarist who purchased the instrument took it to a Curaçao customs agent named Donald Valentina.
Valentina, who collects and repairs guitars, realised that the black Gibson with triple pick-ups (and now sporting burn marks) might well be the famous, long lost Frampton guitar.
Valentina contacted a friend in Holland who happened to be a massive Frampton fan. He too agreed they may well have just struck black Gibson gold.

With me so far?

Donald Valentina then tried to persuade the owner to sell the guitar and in November 2011, after some two years of asking, he agreed to do just that.

But there was a problem. Valentina didn’t have the finances to purchase the guitar.
So he asked for assistance from Ghatim Kabbara of the Curaçao Tourist Board.

Amateur guitarist Kabbara arranged for Tourist Board’s funds to buy the instrument, which was purchased for around $5,000.
He and Valentina then delivered the guitar personally to Peter Frampton.

“I thought the right thing to do was to give him back his guitar,” Kabbara later stated.

Absolutely the right thing to do and all thanks to the original salvager, the musician who then bought the guitar, a Curaçao customs agent, his friend the Frampton fan in the Netherlands and the Curaçao Tourist Board.

You couldn’t make it up.

And so in December 2011 Frampton was reunited with his guitar in Nashville, Tennessee and after repairs at the Gibson Custom Shop was all set to star again in live shows, thirty-two years after it last featured as Frampton’s six-string instrument of choice.
And it’s probably fair to say it won’t be doing any more travelling to and from gigs in a cargo plane.

The historic live performance reunion of artist and guitar was on the 18th February 2012 at the Beacon Theater in New York City.
Frampton introduced his beloved 1954 Gibson Les Paul to the crowd before embarking on a poignant version of 'Do You Feel Like We Do.'
The guitar got as raucous a reaction and reception as the song did.

How Peter Frampton came to own the guitar first time around was almost as fortuitous and unforeseen as its later recovery and return.

Frampton first used the guitar in 1970 while with Humble Pie, when he borrowed it from a fan named Mark Mariana to play the Fillmore West in San Francisco (his own guitar had been giving him feedback problems).
However as soon as he used the instrument he realised guitar and guitarist were a perfect match for each other: “I used it for both sets and my feet didn’t touch the ground,” also recalling that he said to himself “This is the best guitar I have ever played.”

After the show Frampton offered to buy the guitar off its owner, but Mariana insisted on giving it to him:
“…to my surprise he said he couldn’t sell it to me, he wanted to give it to me!”

Frampton went on to use the guitar on the Humble Pie album Rock On, his solo albums and numerous tours until it was presumed lost in 1980.

And although it also featured on Humble Pie’s classic live release Rocking The Fillmore, the guitar is more famous for its appearance on Frampton Comes Alive!, the 1976 album that moved Peter Frampton from respected musician to household name.

Peter Frampton and his favourite guitar may look a little different these days and his six-string partner will always sport its burn marks (“I want it to have its battle scars”) but in quality, sound and partnership, the song remains the same.

And that leads nicely to the reminder that Jimmy Page has never recovered his own three-pickup 1960 Les Paul custom ‘Black Beauty’ after it was stolen at an airport in 1970.
Page has a number of notable or signature guitars but this highly modified instrument is thought to have been used while he was working as a session musician, on the Yardbirds album Little Games and on the first Led Zeppelin recordings.

Inspired by the tale of the famous Frampton guitar and the trail starting in the Caribbean, I think that’s where we should start the enquiries.

It might take some time but I’m willing to make the sacrifice and undertake the search personally.
All expenses paid, of course.