On May 16th 2010 rock and metal singer Ronnie James Dio lost his battle with stomach cancer.

Ronnie James Dio was one of the true greats as regards rock vocal and musical longevity.
He delivered consistently solid performances in heavy rock and metal with acts such as Rainbow, Black Sabbath and his own Dio band for five decades.

After a number of bands in the late '50s and '60s Ronnie James Dio's first name band in rock were Elf, who would later support Deep Purple.
When Purple guitarist Ritchie Blackmore formed Rainbow he recruited Dio (and other Elf members) and the singer went on to feature on three studio albums with Rainbow as well as a number of live releases.

Rainbow Rising from 1976 is, for many fans and music critics, a true rock classic and the album I and many others cite as Ronnie James Dio's finest hour both in terms of rock creativity and vocal performance.
(As an aside, the same goes for another late and great rock vocalist Brad Delp, who died in 2007. Delp's lasting legacy is as the lead singer on the melodic rock masterpiece, Boston's 1976 debut album).

After Rainbow, Ronnie James Dio succeeded in what many fans felt to be an impossible task.
In 1979 Dio not only replaced the seemingly irreplaceable Ozzy Osbourne in Black Sabbath, he helped Sabbath stay on the metal map with album's such as Heaven and Hell (one of the band's most successful records) and Mob Rules.

The singer left the group in 1982 but reunited with Tony Iommi, Geezer Butler and Vinny Appice to record the Black Sabbath album Dehumanizer in 1992.

Ronnie James Dio also had his own lengthy solo career, releasing over a dozen albums including live releases under the Dio moniker. 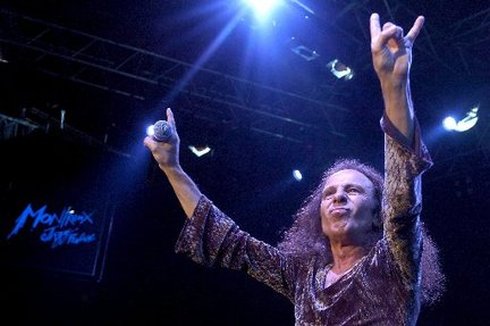 Ronnie James Dio in his natural environment - on stage, playing to
a crowd, microphone in hand and trademark "devil horns" salute.

In 2006 Ronnie James Dio, Tony Iommi, Geezer Butler and Vinny Appice reunited to record three new songs for a compilation album; they then headed out on a hugely successful world tour through 2007 and 2008.
Performing and recording as Heaven & Hell, they released the well received studio album, The Devil You Know, in 2009.
Charting in the UK and a dozen European countries, The Devil You Know was also a Top 10 album on the US Billboard charts.

Ronnie James Dio was still working with Heaven & Hell until he took ill, and they were to be a featured band at the 2010 High Voltage Festival in London.
Sadly, it was not to be.

The truth of the vocal matter is I was not a huge fan of a large body of Ronnie James Dio's work, especially the more metal-based solo career and the Dungeons & Dragons style of many of those releases.
But I was, and remain, a huge fan of his huge set of pipes.

Anyone who attended, or heard, any of the Heaven & Hell tour shows would also be aware that while he may have lost a little of his top-end range, he still had the strength-of-vocal and was a performer to the end.

Because even in his sixties, Ronnie James Dio produced a strength in his pipes that many singers half, or a third, his age, could not and will not match.


The audio track 'Long Live Rock 'n' Roll' (Rainbow, 1978) is presented to accompany this article and in tribute to the memory of Ronnie James Dio. No infringement of copyright is intended.