Spitfires Over Ayrshire
The Spitfires

“There’s no money in this, it’s about keeping the music alive, and live.”
So spoke Ronnie Zorget, at the time of our conversation one of two guitarists with the Spitfires, an Ayrshire based covers and jam band.
Which makes them a local covers and jam band from my Muirsical postal code.

The first part of Ronnie’s statement may be a sad reality, but the latter half, which typifies the Spitfires, should be applauded.
Earlier in 2010 I had caught the band on their mini-tour of the Isle of Arran (sitting just a few miles off the coast of Ayrshire) where we found time for a chat over a couple of ginger beers.

The band was put together in 2009 and is primarily the baby of Jim Davidson and Bill Briceland, singer and bass player respectively.
Both have been around the musical block before - they have already been there, done that, jammed or played with more musicians than I could probably name and bought the t-shirts.

Aiding and abetting Bill and Jim on the Spitfires flights of 2009 and 2010 have been the aforementioned Ronnie Zorget, Italian guitarist Manuel Pasquino and drummer Stewart Handling.
Original drummer Mike Carroll has also sat back in on occasion when Stewart has been unavailable.

So why set up a band that is not geared for making money, but sets up their gear to make music and entertain at local pubs, clubs, for-hire events, and invites other musicians - from seasoned pro to limited ability amateur - to play or jam with them?

It’s something that’s not done enough.
Many acts started their careers that way and there are many resident or house bands around, but they tend to be lounge acts or usually more easy listening as regards music and songs performed. Or they may play the hits of the day.
The Spitfires, however,  are steeped in the classic rock, R&B and rock and roll of artists such as Free, Neil Young, ZZ Top, the Rolling Stones and Stevie Ray Vaughn, to name but five.

Although many well-known numbers and a blues standard or two are usually performed, the band also play songs that are maybe not so familiar.
A few Sensational Alex Harvey Band numbers are in their repertoire (Jim has a vocal similarity to the late and great Scottish front man) and the occasional SAHB hit is in the mix, one of the more regular set-list song being ‘Amos Moses.’
They perform the song as covered by SAHB, but it was originally written and performed by American country singer songwriter Jerry Reed.

There are not many cover bands out there where you will hear ‘Amos Moses’ SAHB style, an R&B standard and then a Pink Floyd prog classic or two.
All in the same set.
But that’s only part of the Spitfires act…

As mentioned earlier, the group is also a jam band and perform with other musicians as part of their modus operandi.
A regular haunt is the Eagle Tavern in Prestwick (the town where I live) and every set on a jam night is guaranteed to feature local talent.
It may be an individual invited to perform an acoustic spot, a couple of musicians sitting in with the band, or a guest guitarist burning off a solo or two.
They also act as master of ceremonies at such gigs, introducing other acts who will play 15 or 20 minutes and get the chance to play to a live audience.

And that takes us back to the opening statement of this article.
Following Ronnie's comment, Jim continued: “We want people to get up and play, sing… instead of performing in front of a mirror we give them the opportunity to play with a band or in front of an audience and that’s what it’s all about. It’s about having fun and playing live. Doesn’t really matter how good or bad they are.”

That’s part of the attraction with this band - it’s not just the fact they are a great fun and good covers band, it’s their whole approach and trying to get kids away from the Guitar Hero games or from believing that X Factor is any sort of true musical apprenticeship. 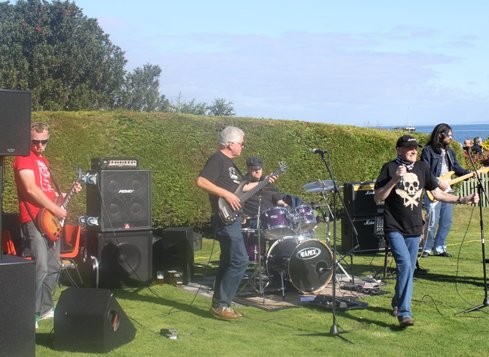 A few months after the Arran gigs I caught up with the band at one of those jam nights. Ronnie Zorget wasn't playing with the group and the band were performing as a four-piece. Manuel Pasquino handled all the six-string duties during the Spitfires sets, then backed or complimented the other guitarists who jammed or guested with the band.

Manuel and Ronnie aren't the only guitarists associated with the Spitfires, however...
Although not currently performing, noted guitarist Ian Seaton should also be mentioned as part of the Spitfires crew (Ian is another with his own previous in the music scene).
Sadly, Ian had a stroke shortly before the 2010 Arran gigs, but is now recovering and looking forward to the time he can pick up one of the rare or classic guitars from his large collection and do what he does best.

As regards the band's future, Bill - another who has suffered a heart attack in the past (while performing) - would like to see the Spitfires add to their crew.
But rather than bring in another guitarist, he’s considering a keyboard player.
“It would add another layer which would allow us to broaden or sound and our set-list. Funnily enough I have someone in mind and he too has had a heart attack, so he would fit right in (laughs). With our past we should have called ourselves The Strokes, but someone beat us to it!”

All of which means it will be the sound of Mk. II or even Mk. III Spitfires that's heard flying over Ayrshire in 2011 and the years beyond.

If you’re in the neighbourhood, check them out.
Because if you like your music live, loud and based on rock standards, you’ll have come to the right place.